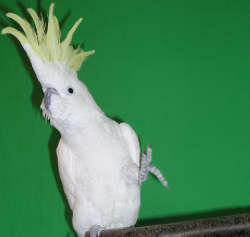 Snowball is a cockatoo who dances. He dances so well that two different scientific studies have been done about his ability to dance.

Snowball first came into public attention when he appeared on the David Letterman Show in 2008 and danced on the back of a chair. His dancing then went viral and his owner, Irena Schulz, made a dozen or so videos of him dancing. Over the years his repertoire of dance moves kept expanding. Today, according to the latest scientific article, he is capable of doing 14 different dance moves.

“He just fell in my lap,” Schulz says of Snowball. Indeed, his first owner could no longer take care of him and dropped him off at the rescue center run by Schulz. Only after she first played music and saw that the new parrot had an amazing talent for dancing, did she realize what had been left at her doorstep.

Patel, et al., published their first paper about Snowball in 2009, writing about the parrot’s unusual ability to keep time with and synchronize movements to the rhythm of pop music. No other animal, except a human, had been able to do that. And among parrots, only the cockatoo seems to have this dancing ability.

Later Snowball’s owner, Schulz, noticed that her pet cockatoo was making some dance moves she’d never seen before, which prompted more scientific analysis. Recently, Patel and colleagues published a follow-up study about Snowball’s repertoire of 14 unique dance moves, “Spontaneity and Diversity of Movement to Music Are Not Uniquely Human,” in Current Biology. They gave these dance moves names, such as “foot lift,” “head bang,” “down swing.” “side to side,” and “Body Roll.”

According to these researchers, their latest observation of Snowball’s dance moves suggests that musical responses may arise from specific cognitive capacities that come together in human and parrot brains. Patel notes, “Snowball does not dance for food or in order to mate; instead, his dancing appears to be a social behavior used to interact with human caregivers (his surrogate flock).”

Patel and his colleagues have succeeded in breaking down Snowball’s dance moves, but the psychological and emotional aspect of his dancing and its effect on viewers is another matter. One by one his videos have gone viral over the years, and I have observed my own reaction to these videos as well as the reaction of others. The videos never fail to bring delight to whoever watches them.

There is something about a little white bird rocking and bopping to Cyndi Lauper’s, “Girls Just Want to Have Fun,” or Michael Jackson’s “Billie Jean.” The movements Snowball makes are humanlike and yet distinctly his own. This little creature seems to get to us more than if we watch a hundred human dancing the same steps.

Upon reflecting on the Snowball phenomenon, I concluded that what Snowball teaches is the delight in little things. Snowball hears the beat of a rock song and instantly begins gyrating to the song. He is completely spontaneous. He does not think about how he looks and is not shy about any of his moves; on the contrary, he goes all out on each move. He is not worried about making a mistake. He is in the movement. And when we watch him, we are swept up with him in the moment.

As we get older, we humans lose that ability to be spontaneous and to be in the moment. Our own individual childhood conditioning causes us to shut down, and the various societal and cultural happenings that befall us cause us to shut down even more. If, as a child, we do something that offends our parents, we are punished. If we do something as an adult that offends another individual or a group, we are asked to apologize.

Snowball’s dance moves come from deep inside him, and he arouses an impulse from deep inside ourselves—some primitive urge that has lain dormant, perhaps for years. This urge has to do with joy, the joy of being alive. We feel that joy in our younger years, but as we get older the joy of living escapes us. It is replaced by the grind of living.

Snowball teaches us about the importance of joy, and about the fact that that joy is still accessible to us all, no matter what age we are, if we want to access it.  Check him out: https://www.youtube.com/watch?v=N7IZmRnAo6s